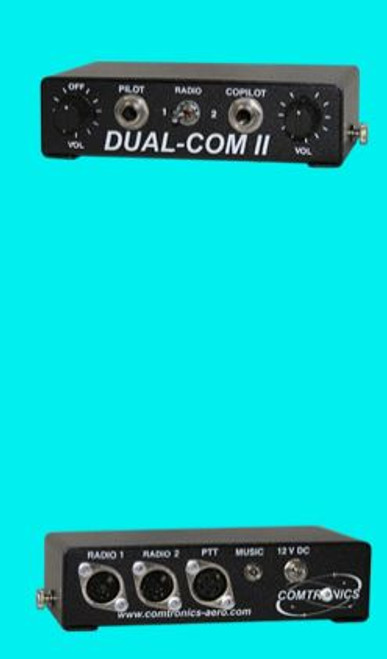 The DUAL-COM II Intercom is a portable two-place unit designed for two-place aircraft and developed for high noise environments. This intercom has two separate volume controls which can be adjusted by either the pilot or passenger to meet individual hearing levels and integrates directly with all Comtronics headsets and helmets providing ar-to-air and air-to-ground communication.

It also has a toggle switch for Radio 1 and Radio 2. This switch allows pilots the option to transmit from either of two separate transceivers while monitoring both simultaneously. Since there are two isolated radio ports for use with two different hand-held radios, pilots can contact the ground crew on one transceiver while notifying a nearby airport on the other. All of this can be accomplished by using the switching circuitry provided.

This circuitry has also been designed with an automatic internal noise canceling feature which eliminates the bothersome "tweaking" to adjust background noise. Also included in the DUAL-COM II is a unique side-tone circuit that allows the user to hear his or her own voice assuring proper operation.

The aircraft-grade metal enclosure virtually eliminates all stray radio interference. Provisions for both a 9-volt battery and external power port are included. The power cord comes with a secure lock-ring and can either be stripped and tinned or terminated with a cigarette lighter plug.

This intercom can also be panel-mounted using a DUAL-COM II FacePlate.

A DUAL-PAQ II Intercom Holder can also be added. This is a sturdy enclosure for shock-mounting intercom to airframe. Construction is a heavy-duty vinyl with hook-and-loop webbing. This DUAL-PAQ II is very well made and does an outstanding job!

Another excellent feature from Comtronics is an In-Line Passenger Push-To-Talk Switch. This switch shuts off the passenger's microphone so that 50% of the noise is gone! Just press the push-to-talk button to speak. The cable is portable and can be moved from plane to plane.